Coca-Cola said Tuesday that it is tweaking the beverage in an effort to make the drink taste more like regular Coke. The product’s can will also look different — all red, rather than red and black.The move comes as Coca-Cola focuses its resources on its trademark products, including Coke, Coke Zero Sugar and Diet Coke after discontinuing some struggling brands. The company hopes the updated version of Coke Zero Sugar will attract more consumers.”Despite its enormous success, Coca-Cola Zero Sugar still represents a relatively small percentage,” of the Coke brand, said CEO James Quincey during an April analyst call discussing first quarter results. “The improved recipe brings its taste even closer to that [of] the iconic Coca-Cola,” he said, adding that “this was influenced by consumer insight and our focus on constant improvement.”The new version, which will replace the current one, is rolling out in the United States this month and will hit Canada in September. Coca-Cola has already updated the product in some international markets, where some customers wonder why Coke is messing with their beloved drink. 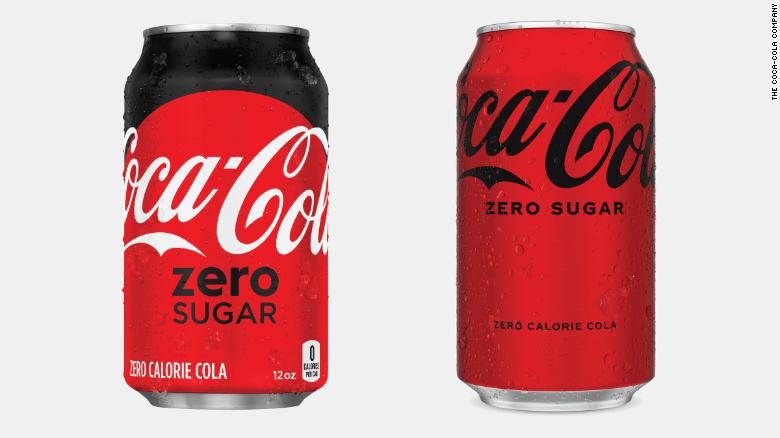 The old version of Coca-Cola Zero Sugar, left, compared to the new.”What have you done to my favourite drink coke zero sugar?” one despondent fan tweeted. “The new recipe is shocking. I won’t be buying another can until you fix your mistake and bring back the old flavour.” Another wrote that the new version helped break an addiction to the product because “the new taste is so bad.”Enter your email to receive CNN’s nightcap newsletter.close dialog

We read all day so you don’t have to.Get our nightly newsletter for all the top business stories you need to know.Sign Me UpBy subscribing you agree to ourprivacy policy.Coke did not say exactly how it was changing the recipe in the United States, but noted that the new version should taste “more refreshing and delicious.”Diehard fans may notice a big difference, but to this reporter, the two US versions tasted similar — with the new iteration slightly sweeter and fuller than the old. In the United States and Canada, both the old and new versions use the same ingredients, aspartame and acesulfame K, to sweeten the product. Different sweeteners are used in other markets throughout the world.Social media critics aside, the company is confident people will love the new product. “We pre-tested both the new recipe and the new look, with current Coca-Cola Zero Sugar consumers and non-consumers,” said Rafael Prandini, category lead of Coca-Cola Trademark in North America. “And they really love it.” The results the company has seen from these launches are “very encouraging,” he said.Coca-Cola first launched Coke Zero in 2005. In 2017, it tweaked the product’s recipe and rebranded it as Coca-Cola Zero Sugar. At the time, the change was also upsetting to some drinkers. One Twitter user begged Coca-Cola to “bring back Coke Zero,” adding “#CokeZeroSugar is gross.” Another called the new iteration “awful.”Ultimately, however, it seems customers have embraced the beverage. In 2020, the product grew 4% by volume, helping lead to growth in the Coke brand overall. And in the first quarter of 2021, Coca-Cola Zero Sugar grew 8% by volume.

From Equity To Royalty: Meaning Of Business Terms Used In Shark Tank India

Oil Has Worst Week in Months; UAE’s OPEC Deal Could Open ‘Can of Worms’

White House Not ‘Sitting on Our Hands’ About Inflation, Biden Adviser Says

New Housing Law May Offer an Opportunity for Entrepreneurs

UP-RERA reviews progress of 76 projects to facilitate their completion

Prime Minister Narendra Modi on Tuesday described the Union Budget for financial year 2022-2023 as people-friendly and progressive. He added, "Budget has been welcomed...

Budget 2022: From digital currency to crypto tax; here are the key highlights

This year’s Budget address was noteworthy on many counts. It was the shortest address by Finance Minister Nirmala Sitharaman in 4 years. Her Budget...

From Digital Rupee to digital university: Budget 2022 was all about digitisation

At the offset, the Finance Minister said that Budget 2022 will be a digital one. It will be focused on boosting the digital economy...

With the government strengthening its commitment towards introducing reforms leading to ease of doing business and making India 'Atmanirbhar' by promoting 'Make in India'...

From Equity To Royalty: Meaning Of Business Terms Used In Shark Tank India

Interest level of viewers has continued to grow as more and more episodes of business reality TV series Shark Tank India have aired. The Indian show...

Business India Publications is a leading media, information and communications company in India with some of the strongest brand names in magazine publishing.
Contact us: partnership@timesdelhi.com

Developers in the Desert: Google’s Oasis for Startups in Dubai

Invest in a Cleaner Environment to Make the Market Booming

Budget 2022: From digital currency to crypto tax; here are the key highlights

From Digital Rupee to digital university: Budget 2022 was all about digitisation